A good long post from Scott Alexander about the Hearing Voices Movement, who think hallucinated voices can be cool and useful and quirky and shouldn't always be medicated away.

As an aside: I dunno how you tell the difference between hearing hallucinated voices vs your inner monologue doing impressions.

Apparently some people don''t have an inner monologue either. Yep, constantly planning. Not always for things to say/write, but for actions to take and descriptions of problems faced.

Only time it shuts up is when meditating really, and mostly not even then.

@hulver @loppear
I'm told newbie meditators are often surprised to find that the voice is there. They never paid attention to it before.

@pre @loppear I tend to think more in abstract concepts or visualisations rather than words. So if I'm thinking about something, like doing the washing up, I might visualise a tidy kitchen, or a stack of plates moving around. That's a bit simplified, it's hard to describe how I think.
Often I'll know I need to think about something, then later a solution will present itself to me fully formed.

Only reason I think I could do that at all and don't dismiss it as impossible is coz apparently I don't have any trouble doing so in dreams where I can see things that aren't there in extreme detail.

@hulver @loppear
And I shouldn't neglect to mention alongside the constant planning and plotting comes the relentless deprecative self-mockery on topics such as every mistake I ever made and every time anyone was mean to me and how awful I am and how everyone's better than me.

That's more under control for me these days. I found ways to make it concentrate on the planning instead. But man it's a pain for the species in general.

greyshley :agummyhug: @dhfir@expired.mentality.rip
@pre >I dunno how you tell the difference between hearing hallucinated voices vs your inner monologue doing impressions.
IS there a difference?
1+
May 26, 2022, 20:38 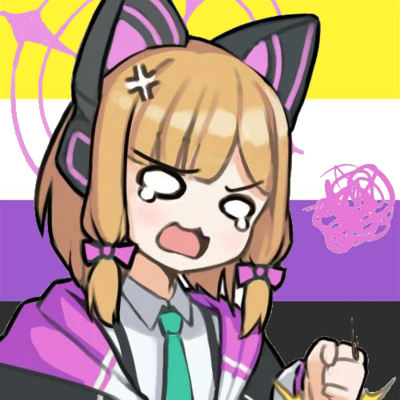 ishiton chu ishi nya (Bred me in the DMs) :awoodance: @meduelelateta@sweet.succubi.services
@dhfir @pre yes, except when its hard to telo them appart then its like there was not diference
0
May 26, 2022, 20:42

I have memories of reading in a magazine years ago that some scientist or another thought people had networks in their brain that decided if a thing was caused by you or caused by something else, and they'd done scans or experiments or something clever and found the people hearing voices had a slower reactions in those circuits.

So the schizophrenic patients might just be mis-attributing their own thoughts as a voice from god or whatever.

That sounds like so much bollocks though, I probably misremember it entirely.

If I'm thinking about what someone else might say in the imaginary conversations that fill my brain all the time they sound like they're in that person's voice, but I can't do an impression of them.